A Louisiana community has been rattled by news that its water supply is contaminated with an amoeba that can destroy brains. Doctors say drinking water that contains Naegleria fowleri is safe but if it the microbe slips into your nostrils, it could crawl up holes in the base of your skull and wage an all-out assault on your frontal lobe. Experts say locals may want to avoid freshwater.

Louisiana officials have cautioned residents to be careful after a deadly brain-eating amoeba was found in a parish water supply. 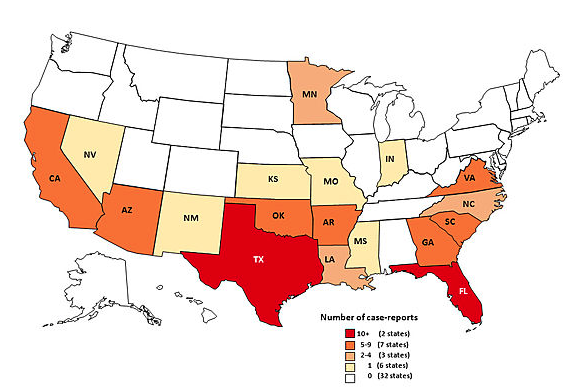 The Louisiana Department of Health and Hospitals announced that the Naegleria fowleri amoeba was found in the water system of St. John the Baptist Parish.

The microscopic amoeba can be deadly if contaminated water travels through the nose to the brain. The microscopic pathogen can cause a deadly form of meningitis that or a swelling of the brain and surrounding tissues.

The water system where the amoeba was found serves 12,577 people in three Louisiana towns.

While the source of the contamination was not found, officials said that they found the water supply did not have the required level of chlorine disinfectant and was vulnerable to contamination from Naegleria fowleri.

There have been no reports of infections from the amoeba in the area.

To kill the dangerous pathogens the department will flush the system with extra high levels of the chlorine for sixty days to kill any lingering amoebas in the system. The water will still be safe to drink.

While the amoeba is extremely rare, the pathogen was responsible for at least three deaths in Louisiana parishes since 2011. Last year a 4-year-old boy from St. Bernard Parish was killed after contracting the infection from using a slip-in-slide.

This summer a 9-year-old girl from Kansas died after being infected with the amoeba.

"Families can take simple steps to protect themselves from exposure to this ameba, the most important being to avoid allowing water to go up your nose while bathing or swimming in a pool," said Louisiana State Health Officer Jimmy Guidry. "It is important to remember that the water is safe to drink; the ameba cannot infect an individual through the stomach."

According to the U.S. Centers for Disease Control the symptoms of an infection from Naegleria fowleri include headache, fever and nausea. As the disease progresses, infected people can have seizures, altered mental status, hallucinations and slip into a coma.

The disease is almost always fatal. In the U.S. between 1963 and 2013, just three people out of 132 managed to survive the infection, according to the CDC.