On May 16, Godzilla will smash his way into theaters for the first time in more than ten years, but is the lizard kings return to the silver screen as big as everyone has been saying it is? To say people 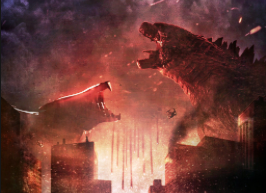 have high hopes would be an understatement, heck I was one of them. If you’ve been keeping track of some of the articles I had written a few months ago about how good the marketing for Godzilla was, then you’d understand that my expectations for the movie were as big as Godzilla himself.

Having seen it now, there’s just one thing on my mind. Is it to early to say my favorite movie of the summer has arrived? Yes it is, but it was really cool.

For starters, this movie has just about everything a great summer blockbuster requires. It’s massive budget allowed for some really great CGI, there are countless explosions, there’s scenes of mass peril, there’s an unlikely hero, there’s a love story, there’s a little bit of comedy, and oh yeah, there are some epic fight scenes between Godzilla and an equally big challenger.

Months ago there were a group of us that were speculating the existence of this other creature after seeing the first trailer. Then, just a few days later, that speculation was confirmed and as the months went on, we finally found out that M.U.T.O. would be the creature Godzilla faced.

I don’t want to ruin too much of the movie here, as always, I’m a big advocate for experiencing the movie yourself, so all I will tell you is that the fight scenes are easily the best part. At certain points you forget how big the two creatures actually are, until they slam one another into a skyscraper, and then you’re like, “Oh, that was a building . . .” At points of the fight, my jaw literally dropped, yeah, I guess I’m one of those people.

Of course there is no such thing as a perfect movie. Though I wouldn’t say I left the theatre wanting more, the movie could have been better if it included just a few more things. First of all, I know it’s hard to explain why such a large creature has been able to live on the planet undetected for so long, but I think the story was a little iffy in some places. I’m not saying I have the solution to the perfect Godzilla story, but in some spots I do think a better explanation was available.

Second, there needed to be more Bryan Cranston. After leaving the theatre, that was pretty much the one thing I heard everyone say. The trailers had me believe that he was going to be the main character of this movie. I won’t tell you anything about his story or what happens to him, but if anything he plays the supporting role to Aaron Taylor-Johnson, and not the other way around, like the movie seemed to have been advertised.

Third and finally, I wanted more Godzilla. M.U.T.O. spends more time on screen than the movies namesake, and while both creatures are impressive to watch, I much prefer the lizard king to a bug. All I can hope for is that there will be more of him in the sequel (which I can pretty much guarantee there will be). I’m already placing bets on which monster he takes on next (I’m personally hoping for Destroyah.)

This is without a doubt the must-see movie of the week, possibly the month, and maybe the summer (that may be a stretch). If you get the chance, go to a theatre with IMAX, it will be well worth the extra couple of dollars; this is the type of movie IMAX was made for. Don’t waste anytime.

Power Strip - Strips Your Pain Away
Norwegians Thought Aliens Had Taken A Fancy To Their Country Back In The 1950s
The kayak trip of a lifetime
Your Face Can Determine How Long You Will Live
Massive Earthquake 8.0 Shakes Aleutian Islands - Alaska